The UNBC Timberwolves became the first college or university track program in Canada to unveil an alternative logo and jersey designed by an Indigenous artist.

A ceremony was held at Masich Place Stadium this morning (Wednesday) to unveil the new look, designed by artist Gitxsan Trevor Angus.

“This project has taken a long time and I am delighted with the end result. The collaboration between many different organizations, donors and our artist Trevor has been amazing and I am honored to have been part of the process from start to finish, ”said Loralyn Murdoch, Director of Athletics.

“The sense of pride that I hope every student-athlete feels when wearing this uniform is something he will remember forever. “

Angus, who attended UNBC from 2000 to 2003, previously designed the logo for the university’s First Nations Center.

During his visit to the Prince George campus, Angus was approached by the sports department about the possibility of designing his own interpretation of the Timberwolves logo.

“I was so excited when this opportunity presented itself. I remember going to UNBC basketball games and thinking I wish I could redesign the jerseys with my Gitxsan rocket, ”Angus said. 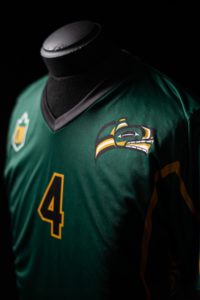 (The football version of the Aboriginal themed jerseys for the UNBC Timberwolves. Photo provided by UNBC Athletics)

“When the Timberwolves approached me with the idea, I was thrilled. It was a long time to prepare because of Covid, but I am happy that it is finally revealed. “

As inspiration, Angus took and interpreted the Timberwolves’ wolf logo, used since 1998, while creating a custom native piping that adorns the sides of soccer and basketball uniforms. The artist also provided UNBC with an additional wolf design that sits subtly below the main Timberwolf logo.

Beyond incredible artistry, the jerseys and shorts display meaningful messages important to Timberwolves and program stakeholders. In consultation with Lheidli T’enneh’s Chief and Council, the shorts carry syllables that translate to “En Cha Huna,” while this phrase is found on the back shoulders of each jersey. “En Cha Huna” is the motto of UNBC, by Dakelh (Carrier) Elders, and is interpreted as “respecting all forms of life”.

The football version of the new shirts will debut on Saturday against visiting TRU WolfPack.

The event will be the first “Nats’ilnik Day”, which is the Dakelh word for “come together”.

In addition, the UNBC basketball teams will have their first “Nats’ilnik Day” on November 6, also against the Wolfpack.